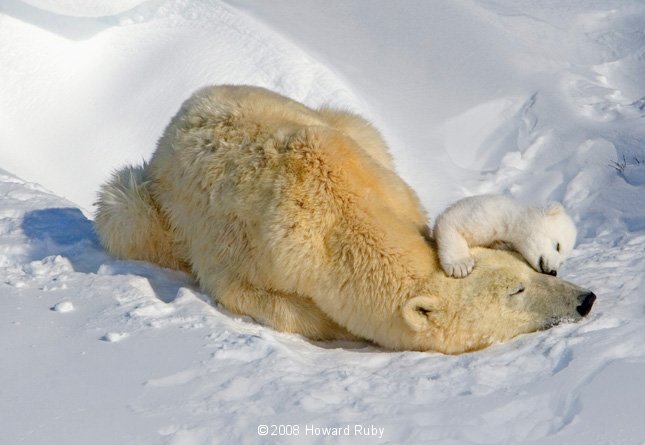 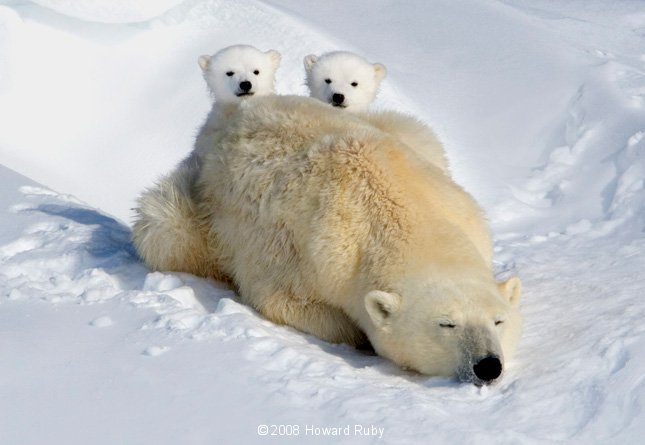 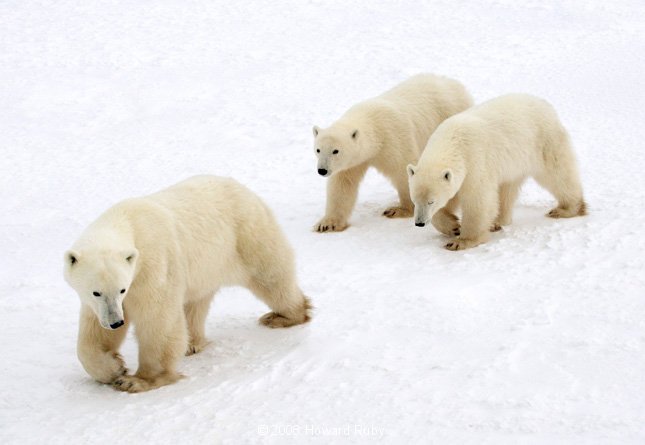 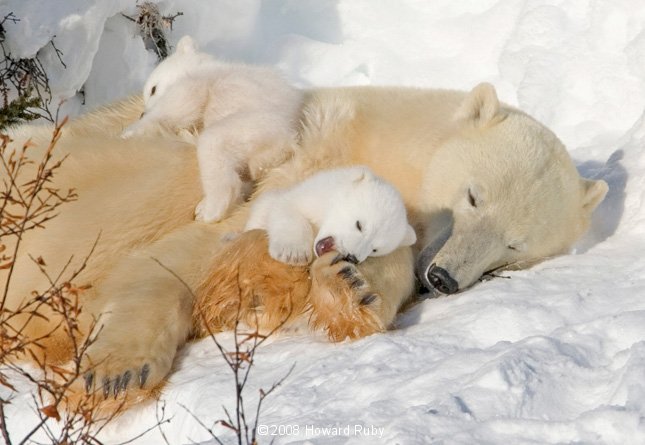 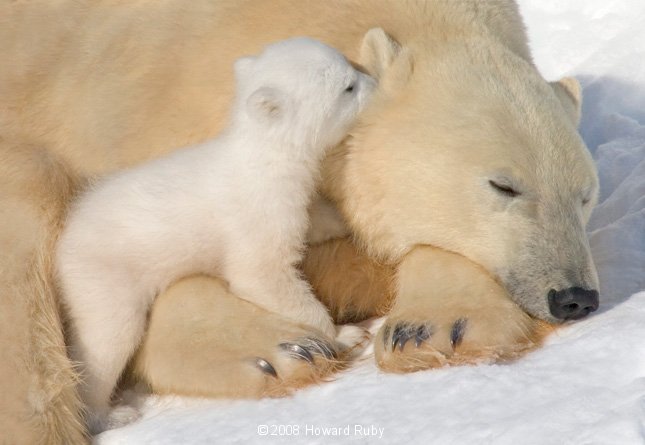 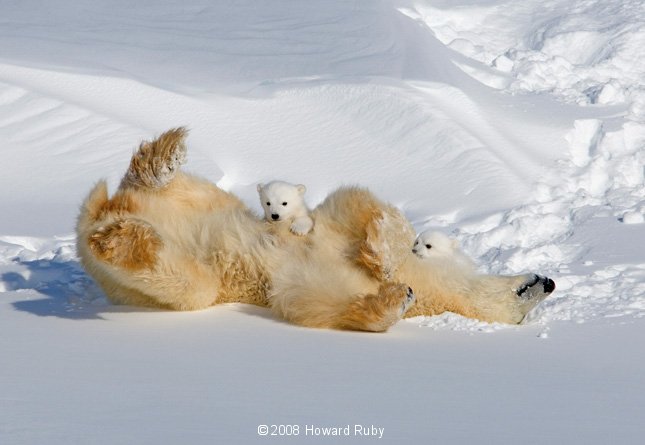 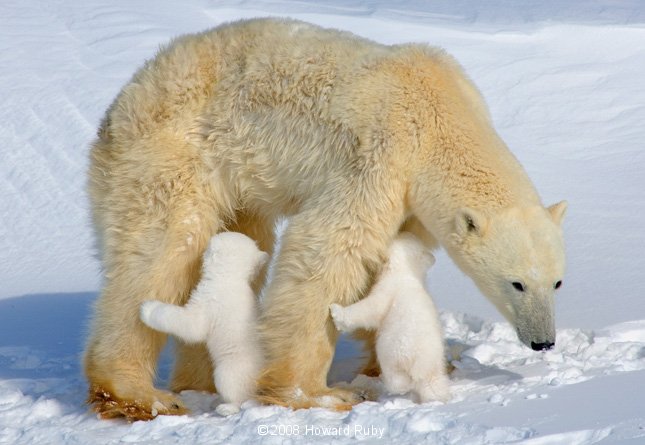 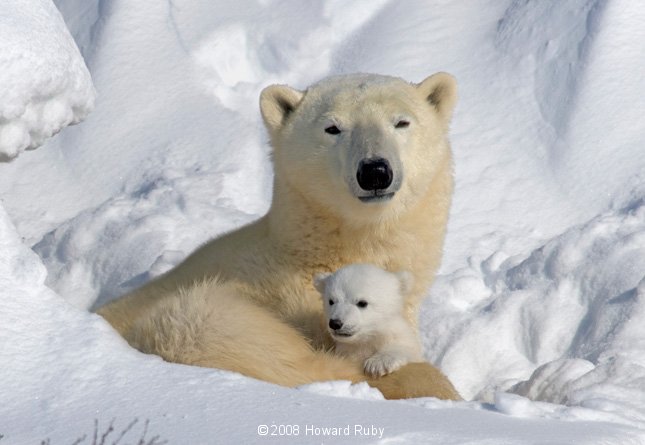 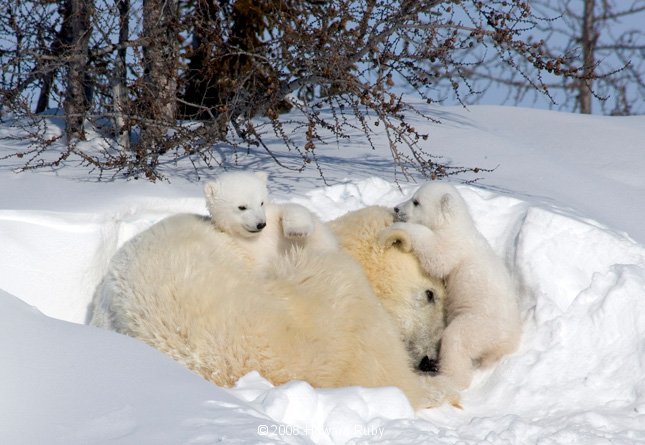 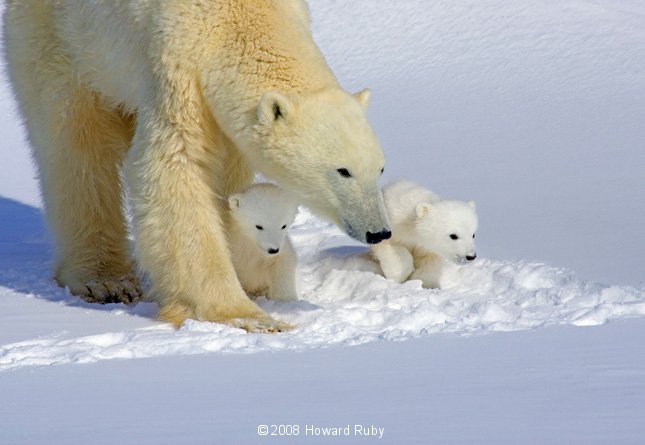 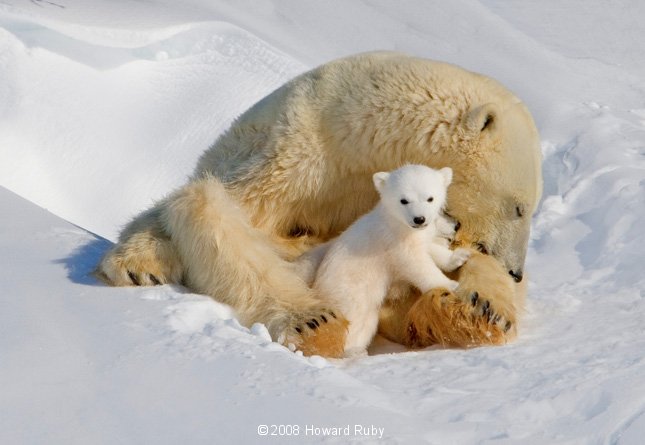 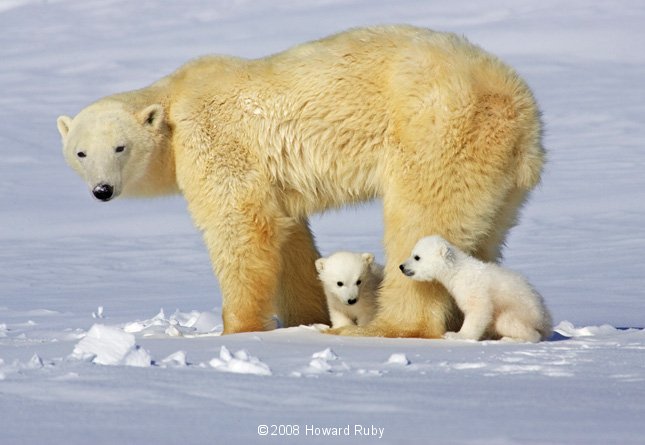 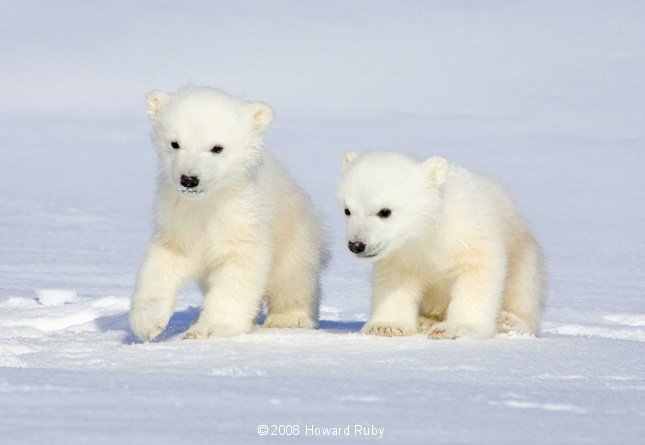 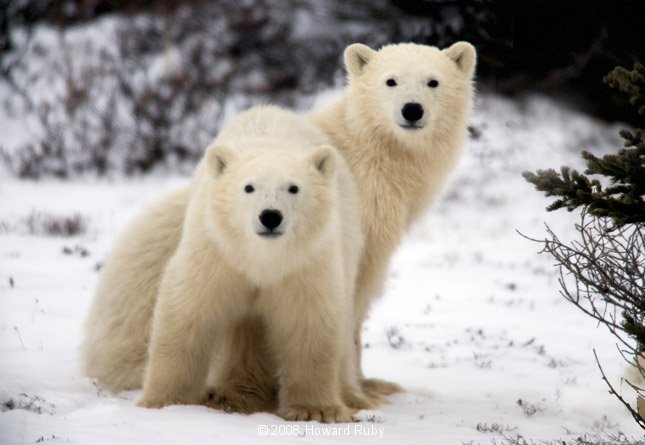 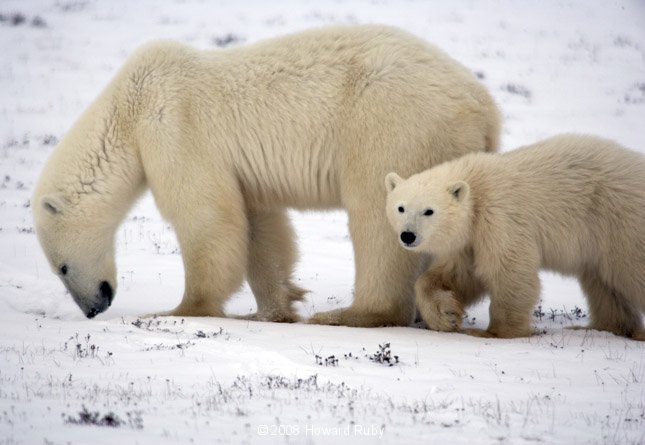 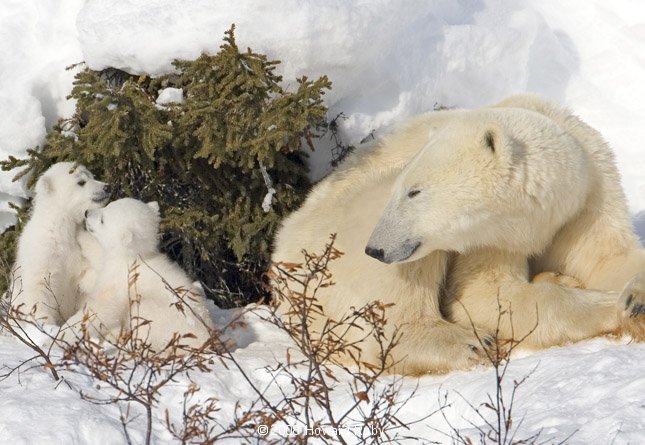 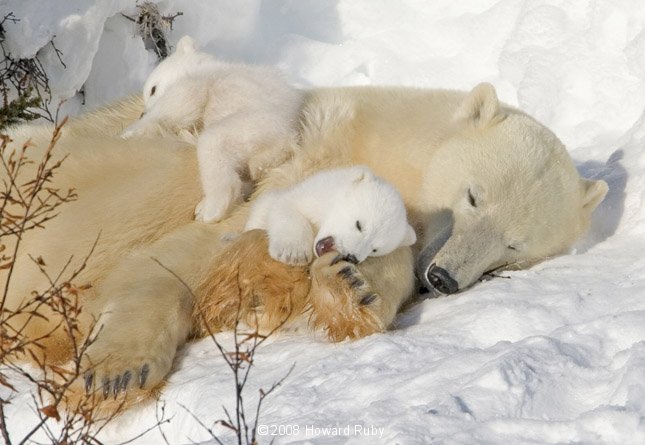 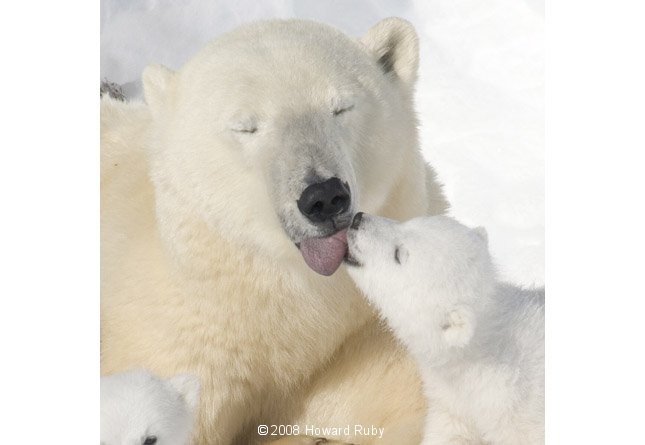 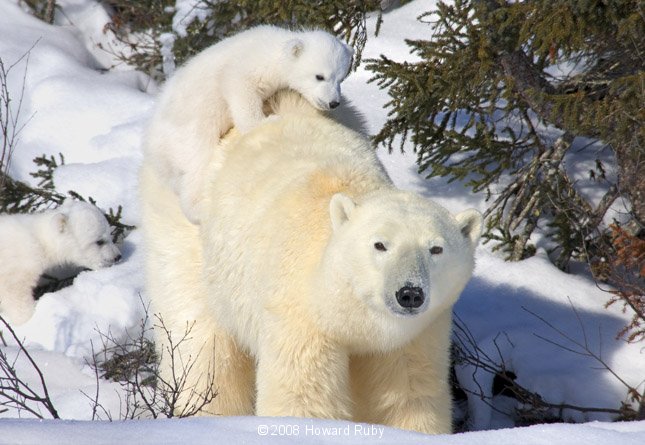 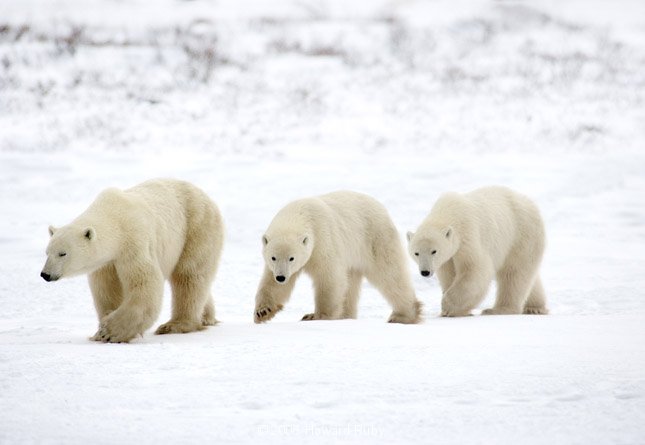 In the fall, female polar bears that will soon be mothers make a den. Usually the female finds a hillside near the sea. There, she claws out a cozy home in the snow or cool earth. She crawls in and sleeps through much of the winter. During this time, the mom gives birth, usually to two cubs. Mom and her cubs stay in the den, safe from the brutal winter weather. Newborn cubs are tiny, toothless, and totally helpless. Each one weighs just over a pound, as much as an adult squirrel. The cubs’ eyes are closed, and they have thin hair and no fat. To keep warm, they snuggle up against Mom. Mom nurses her cubs often. By the first month or so, the cubs have opened their eyes. Soon they have teeth and a coat of thick fur.

By early spring, the cubs are ready to leave the den. They weigh about 30 pounds each, around the same as a cocker spaniel. They follow Mom out into the big snowy world, where she keeps a close watch on them. The little cubs soon discover how to have fun. They chase each other and slide down slopes on their backs. After a while, the cubs stop playing, and Mom lets them nurse. Then it’s naptime. Most cubs stay with their mom for two and a half years. She shows them how to handle thin ice, blizzards, rough seas, and other dangers. She teaches them where and how to hunt. With luck, all that their mom has taught them will help them survive.

These days, polar bears face a problem global warming. Global warming is something that is happening to the climate of the Earth. It’s causing the average temperature to rise around the world. Rising temperatures are causing Arctic ice to melt earlier in the spring and to form later in the fall. Because polar bears depend on ice to find seals and other food, less ice time means they may not get enough to eat. Many scientists are working hard to learn all they can about global warming. They hope to use what they learn to help the bears.